Maybe “un-island” would be a better term.  Like “undone,” meaning: something that once was but is no longer . . .

The Saturday morning of Memorial Day Weekend 2013, my friend Susan and I stopped at New York Bagel on Woodward Avenue, just three miles north of the famous “first mile of concrete highway,” before jumping on an I-75 stretch of concrete and heading south. 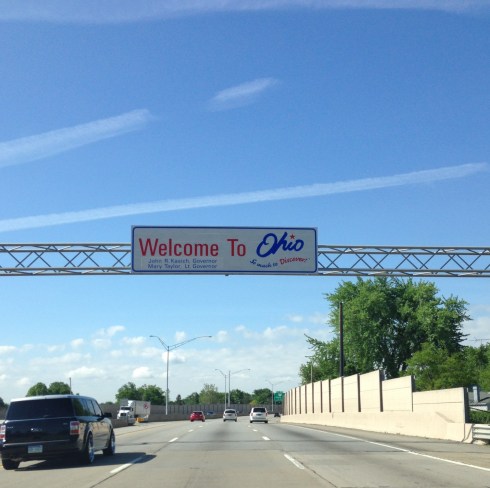 We were off to explore two Ohio islands:  Catawba Island and Johnson’s Island.

Catawba Island, which is (currently) a peninsula sprouting off of the north side of the larger west-to-east peninsula of Marblehead.  Marblehead Peninsula serves as the northern arm of the long Sandusky Bay (which you can cross by bridge if you were coming from the east):

So why is this landmass, Catawba Island, not just called “Catawba” and referred to as the peninsula it appears to be?  Why does this peninsula have “island” in its name?

“‘Why, and wherefore an island?’  This question is usually the first formulated and put by the curiosity-seeking stranger who approaches Catawba Island by stagecoach from Port Clinton–which, by the way, is the most available, and at certain seasons the only feasible, route thither.

“A trip to an island by stagecoach, instead of in a boat!  The idea appear anomalous as it is novel: something similar to going to sea by rail, and, to discover how the thing is done, grows into a matter of keen interest as the observer progresses.

“His geography informs him than an island is ‘a body of land entirely surrounded with water’; and looking ahead–as the driver whips up his team–he vaguely wonders where, and how far along, the water lies, and how they are to get across it.  Imagine, then his complete surprise when, after a jaunt of several miles, the driver informs him that the mainland is already far behind, and they they are now on Catawba Island.  Had the stranger turned back a few miles over the route, to a place where the two main thoroughfares, the ‘sand road,’ and ‘lakeside’ road, form a cross, or fork, he might have been shown a narrow ditch with an unpretentious bridge thrown across it.  This ditch, terminating at the lake, is all that now serves to make Catawba an island.  Old settlers can remember, however, a narrow but clearly defined channel that extended between it and the mainland.  Among the Indians* who as late as 1831 made the wilds of Catawba a rendezvous, there was rife a tradition that the course of the Portage River extended originally where on the ditch now remains, and that the water of this river, flowing towards its outlet at West Harbor, formed the island.”

[* The Lake Erie Island region was occupied by Ottawa and Huron (Wyandot) tribes at different times in the days before the War of 1812.]

So perhaps you can imagine what we were up to once we got on Catawba.

Yep, we started looking for “a place where the two main thoroughfares, the ‘sand road,’ and ‘lakeside’ road, form a cross, or fork.”  None of the roads today are made of sand (more about that in another post); however, the  bed-and-breakfast where we had reservations for the night, Five Bells Inn, had an address on E. Sand Road.

A few times turning around in driveways on the busy two-lane Sand Road, a couple back and forths down the same stretch of road, but, yes, there was a fork of two roads shortly beyond the base of the “peninsula” and  look what we found:

. . . which widens on the other side of the road into a true canal:

There was a red fox that had appeared to have been hit by a car, dead against the curb of Sand Road directly over where the culvert carried water across under an “unpretentious bridge” . . .

Satisfied that we’d succeeded at our Ditch Quest (we’ll return to whether or not we did succeed), we headed north for two miles on Sand Road . . .  .

. . . to Eileen and Jerry Jarc’s wonderful hospitality and their Five Bells Inn . . .

We stayed in Room 7, a lavender retreat, in a cottage behind the main inn:

This was our view from our front porch:

After getting a carry-out lunch from Rudder’s Cafe and Deli and picnicking at Catawba State Park . . .

. . . where I saw more Blue Herons in the space of an afternoon than ever before:

. . . we went to the Ottawa City General store at Catawba Point to “take a walk through the past (with) a touch of the new:

. . . to visit with Don Rhodes, editor of Legends of Catawba, (Catawba Historical Society, 2008) and discuss the merits of our Ditch Quest:

. . . and then off we went biking, up hill and down, (by invitation) in the private Catawba Cliff development.  One could see how the Cliffs must have been wonderful at one time before lots were surveyed and sold, but now they primarily serve as features of the residents’ landscaping.  While that use speaks volumes, we weren’t sure what statement was intended with this faux ruin. 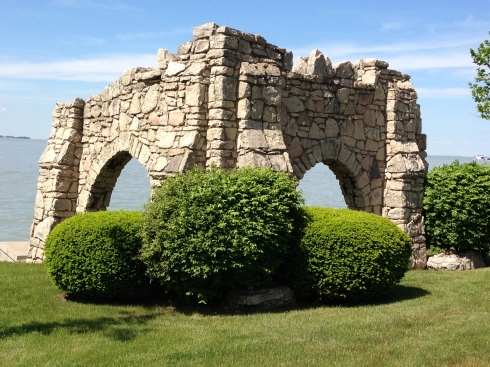 We ended up at the truly historic Mon Ami winery and restaurant on Catawba:

. . . where we celebrated our Ditch Quest success with a sampling of their wines:

. . . and where we also had some “Walleye Bites”; after all, being at Lake Erie (and apparently in the Port Clinton area, in particular), we were in the . . . 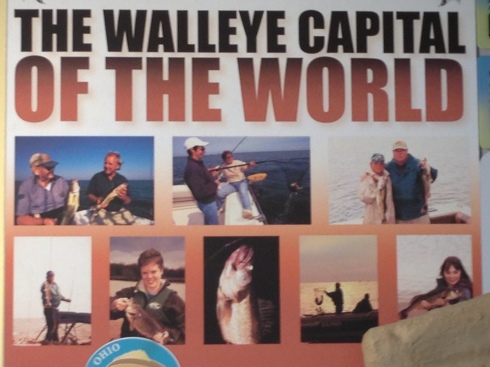 We “came home” to the evening view from the Five Bells Inn waterfront:

(Marred only by the Davis-Besse Nuclear Power Station across the lake in Oak Harbor, Ohio on the horizon.)

I watched the end of the sunset from the hot tub on the side deck of the Five Bells Inn and woke to this sight on the water before breakfast:

Michigan may have had the first mile of concrete on Highway M-1, but Ohio had these very sweet stone mile markers, “milestones” they were: 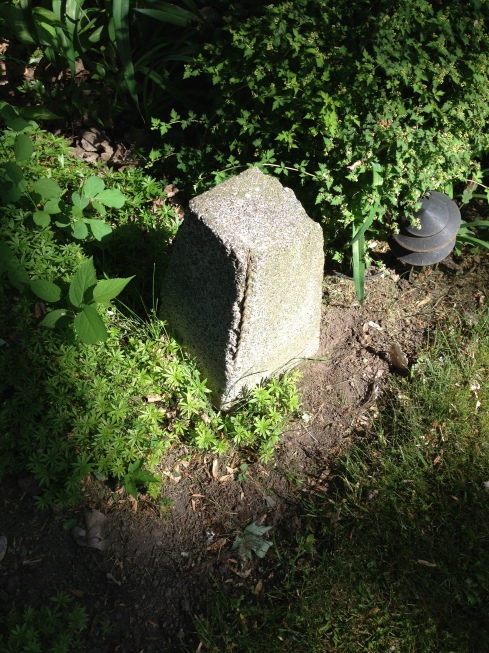 7 thoughts on “The “Non-Island” of Catawba Island”