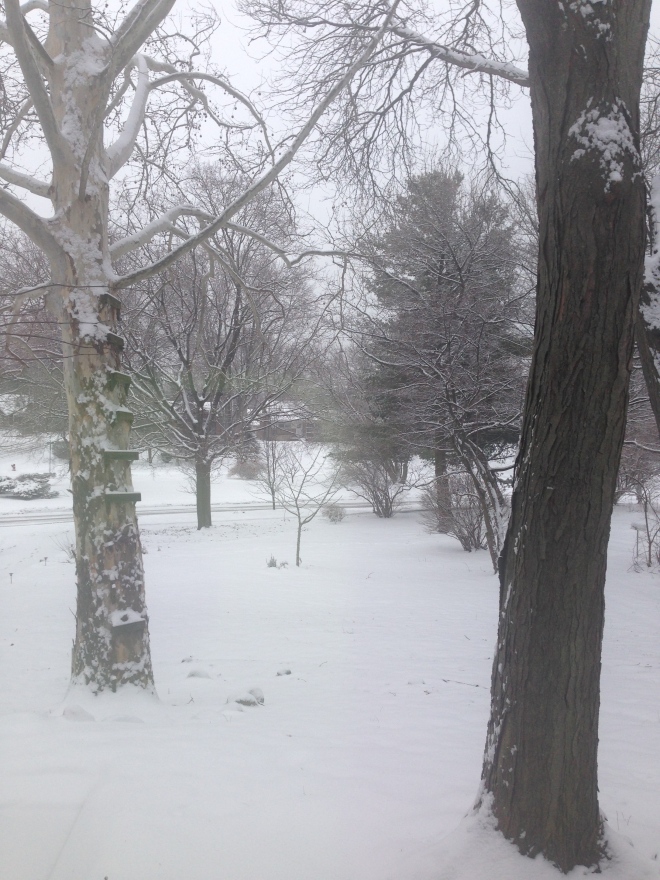 Look outside your window. What weather are you seeing today? The view from my study on Saturday, March 5, 2016 was not inspiring (and this is not a sepia print!).

What’s one to do in a Midwest March? My solution is to book an island getaway for the near future. And I did just that Saturday shortly after taking the above photo.

Now, you may be imagining me—or better yet, yourself—lying back in the warm sand, sighing your winter tension away, and gazing mindlessly up at a hot sun.

I don’t know about you, but I haven’t the time or the money for a tropical island escape at the moment. However, I do have a bounty of islands—easier to get to islands, less expensive to visit islands, and more unusual islands—from which to choose because I live in the “Mitten State.”

Over the last few years, I have explored 136 Great Lakes Basin islands. And I have done this without using private watercraft or plane. Every one of these 136 islands is accessible by ferry or bridge.

When you plan an early spring Great Lakes island escape, you have two choices:

2. Alternatively, you might consider escaping to an island in the southern extreme of the Great Lakes Basin: a Lake Erie island.

And by ferry, you have your choice of three early spring island escapes in the western basin of Lake Erie. Here they are, in order of when the ferry starts running . . .

Kelley’s Island is an  American (Ohio) Island, served by Kelleys Island Ferry, whose 2016 vehicular ferry service to the island began on Friday, March 4th at 8:00 a.m. The ferry departs from the Ohio mainland peninsula of Marblehead for its 20-minute trip to the island.

Kelleys Island has a lot of protected green space and six miles of trails through it, one of the best examples of glacial grooves to be found in the world, Inscription Rock, a historical museum, a cemetery, ruins, an amazing sculpture garden, a winery, and a brewery, just for starters.

March and April special events on Kelleys Island special include: the Easter Egg Hunt, the Early Bird Party, the Blessing of the Kelleys Island Brewery, and the Spring Wine Fling.

Click here for more information about Kelleys Island, including an island brochure and an island map.

South Bass Island is an American (Ohio) Island, also known as “Put-in-Bay.” From South Bass Island, you can also access two additional islands (Gibraltar Island and Middle Bass Island) by passenger ferry. Miller Ferries (a vehicular ferry) left from the Ohio mainland peninsula of Catawba Island for its first 2016 crossing (of under 20 minutes) this past Saturday, March 5th at 8:30 a.m.

South Bass Island, or “Put-in-Bay” as the harbor, the township, and often the entire island is called, is known as the “Key West of the Midwest” by some, particularly boaters who enjoy partying in the aforementioned harbor and in the drinking establishments stretching along Delaware Avenue, just off the harbor.

But there is plenty more than partying opportunities to be enjoyed on South Bass Island.  Climb up the Perry Victory and International Peace Memorial and see an aerial view of the Lake Erie Islands or climb down to Perry’s Cave. Climb up the South Bass Island Lighthouse or climb down into the world’s largest geode, the Crystal Cave (and back up to enjoy a glass of local vintage in Heinemen’s Wine Garden).

Or catch the passenger ferry and head off to explore Gibraltar Island, home to the OSU Stone Lab, the Cooke Castle, and some glacial grooves, or ride the Sonny S to Middle Bass Island, site of the historic Lonz Winery.

NOTE: Beginning in May, you can also get to both Kelleys Island and South Bass Island (Put-in-Bay) by passenger ferry from Port Clinton, Ohio or Sandusky, Ohio (where the Cedar Point Amusement Park is located) via Jet Express.

Pelee Island is a Canadian (Ontario) island and my Great Lakes Basin “go-to” island, against which, I must confess, I measure all other islands. This year, the Owen Sound Transportation Company‘s first ferry to Pelee will depart for its hour-and-a-half trip from Leamington, Ontario on Friday, April 1st. (The ferry makes the trip between Kingsville, Ontario and Pelee Island beginning in August and for the remainder of the season.) Trips to Pelee Island from Sandusky, Ohio begin in May.

You could spend three full seasons exploring Pelee Island, the southernmost inhabited landmass in Canada, by bike on the flat rural roads or by foot on the trail system.  Or those so inclined could spend two of those seasons with binoculars trained at the treetops and sky above, where the Atlantic Flyway and the Mississippi Flyway converge. And there is something for everyone to enjoy at the annual Springsong event, celebrating both birding and books, during the first weekend in May.

Meanwhile, get your bearings at the Pelee Island Heritage Centre, explore the island’s two provincial nature reserves, Lighthouse Point and Fish Point, the Stone Road and Brown’s Road alvars, and the glacial grooves at Mill Point. Swim at one of the public beaches. Visit the cemetery and the historic churches.  Drop in to the Pelee Art Works and stop by the Pelee Island Wine Pavilion.  Pelee Island is a place where discovering the pleasures of “island time” comes easy.

So faced with March snow in Michigan, I booked my 2016 ferry reservations to Pelee Island this weekend. And although I can hear the drip of melting snow today from my desk and although it is supposed to get to 66°F by midweek (it is March in Michigan, after all), a Great Lakes island escape can’t come soon enough for me.

The time to plan is now! What Great Lakes island are you planning an escape to in 2016?

2 thoughts on “Are YOU dreaming of an island escape?”