I was asked both of these questions Friday . . . And do I have some islands for you! (But I’m thinking that may be a well-established fact at this point.)

Get Thee to “Island Time!”

Instead, let’s consider how islands are the perfect places to bond with friends and loved ones. Islands are intimate. Often, islands are removed enough to feel–if not be–“off the grid.” You take a ferry, or you cross a bridge, and there you are . . . together. And, there, apart from your day-to-day life, you’re on “island time!”

I was accompanied by a companion on each of my 27 trips to the 136 Great Lake Basin islands, all accessible by ferry or bridge. I’d started figuring the “companion piece” out when I was piloting my island project alone in July of 2011 and confirmed the value of it in April of 2013 with my friend Val. Having another pair of eyes to filter each island experience through proved invaluable!

Twenty of my 27 island traveling companions were women friends (two of them each accompanied me on two island trips) and five were family members. I will be forever grateful to each of these 25 adventurers–for braving some intense time alone with me in addition to whatever adventures the islands provided us! I have many wonderful memories of island times with friends and family that I replay often and will cherish the rest of my life.

Today, with my book’s release only two weeks off, I’d like to pay tribute to some of the family members who traveled with me; they each–along with my dad, a writer himself–supported me in many ways during my island project.

My sister-in-law Noreen Daly-Seiler–featured with me above as we ferry across the St. Clair River–accompanied me on May 21, 2014 to Walpole Island. The six islands that make up Walpole have never belonged to either Canada or the United States. Inhabited by the people of the Council of the Three Fires–the Ojibwe, the Potawatomi, and the Odawa–this island belongs to the Walpole Island First Nation and is called Bkejwanong (“where the waters divide”). But we’ll save that island adventure for another day and turn to the other four . . .

Visiting a Belle Isle with a Belle Artiste

My mom Caroline Dunphy (the artist C. Dunphy)–who created the eleven body-of-water watercolor maps for Great Lakes Island Escapes: Ferries and Bridges to Adventure (just wait until you see them!)–accompanied me for a day trip to Belle Isle on October 9, 2013. She had visited the island, a 985-acre city park, over the years, but not recently. Our visit came just four months before Belle Isle became Michigan’s 102nd state park under a special lease agreement with the City of Detroit.

After beginning our day with a visit to the “mainland launch” of Pewabic Pottery, we crossed the MacArthur Bridge (aka, the Belle Isle Bridge), drove the island’s perimeter road, walked around the Scott Fountain and to the Livingstone Lighthouse, and visited the Belle Isle Nature Zoo as well as the Anna Scripps Whitcomb Conservatory. Here’s my mom at the Lily Pond between the Belle Isle Aquarium and the Conservatory.

A Different Type of “Bring Your Daughter to Work” Days

Both of my daughters got married during the two years I was researching my book, so one spectacular destination wedding  was added to each year of my island trips: one in September of 2013 (to the top of the Willis Tower, formerly the Sears Tower, in Chicago) and one in June of 2014 (to Emerald Isle on Bogue Banks, a barrier island along North Carolina’s Crystal Coast). Despite their newlywed status, each daughter was game to accompany me on an island trip.

My daughter Caitlin Skye and I visited Wooded Island in the Jackson Lagoon off of Lake Michigan on August 2, 2014. Pedestrian bridges connect the island–an island which once was a peninsula 125 years ago–to Jackson Park, adjacent to the Hyde Park community in Chicago. We walked just about every inch of the island, including through the Paul O. Douglas Nature Sanctuary, and spent time in the beautiful Japanese garden. This shot was taken on the shoreline at our picnic site in the Garden of the Phoenix (formerly, the Osaka Japanese Garden).

My daughter Meagan Mná and I visited Erie, Pennsylvania’s Presque Isle in Lake Erie, August 15 – 17, 2013. A causeway connects the mainland to the peninsula–a peninsula which has been an island four times in the last 200 years. This observation deck overlooks the Migratory Shorebird Sanctuary and was our hiking destination off of Gull Point Trail, the “high point” of a hike we took in the middle of our daylong bike ride around Presque Isle State Park. 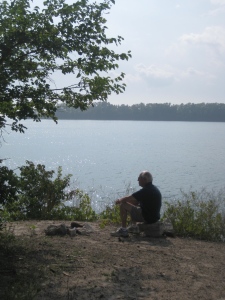 One of Many Islands over 40 Years Together

For the last of my 27 island trips, on August 22, 2014, I invited my husband Craig Daly to accompany me on a day trip to Ontario’s Bob-Lo Island (aka, “Bois Blanc Island,” the Canadian one) in the Detroit River. We’ve been to many islands together in the last 40 years. To get to this one and celebrate Craig’s birthday a day late, we ferried from Amherstburg, Ontario.  Later, we found ourselves here, having hiked the length of the White Sands Conservation Area to the end of the Detroit River, where we could see Lake Erie.

Island time makes for some of the best bonding time. Plan your island escape with a loved one or friend today!

To win a copy of Great Lakes Island Escapes: Ferries and Bridges to Adventure, identify the subject (the fauna, not the flora) in each photo below and guess which photo belongs with each of the four island trips described above.